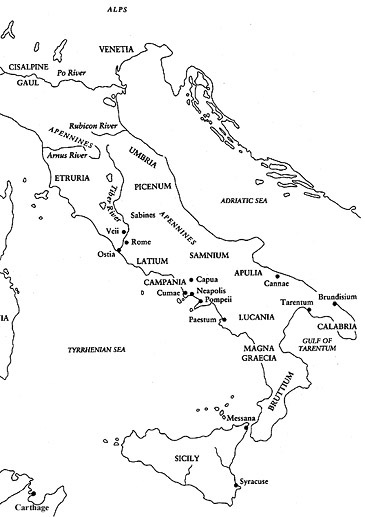 According to Suetonius (Julius Caesar 31-32), “Caesar overtook his advanced guard at the river Rubicon, which formed the frontier between Gaul and Italy. Well aware how criticial a decision confronted him, he turned to his staff, remarking: ‘We may still draw back: but, once across that little bridge, we shall have to fight it out.’ As he stood, in two minds, an apparition of superhuman size and beauty was seen sitting on the river bank playing a reed pipe. A party of shepherds gathered around to listen and, when some of Caesar's men, including some of the trumpeters, broke ranks to do the same, the apparition snatched a trumpet from one of them, ran down to the river, blew a thunderous blast, and crossed over. Caesar exclaimed: ‘Let us accept this as a sign from the Gods, and follow where they beckon, in vengeance on our double-dealing enemies. The die is cast.’” (translated by Robert Graves )

Close this window when finished.