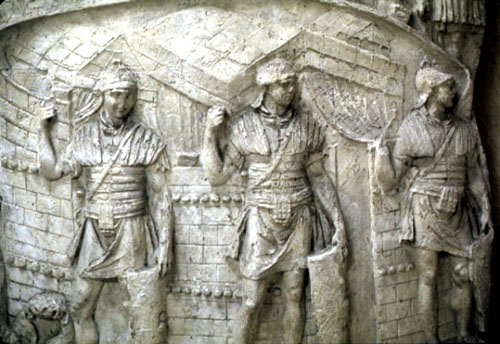 During much of this period an ordinary legionary soldier (miles legionarius) wore fairly standard armor, which was well adapted to the legionary style of fighting. Over a simple woolen military tunic (which ended above the knees), he wore a corselet made of curved strips of metal fastened together with leather thongs (known today as the lorica segmentata, though this may not have been its name in antiquity); this provided good protection with the maximum amount of flexibility. His helmet (galea) was made of metal (usually iron); though there were various styles of helmet, most had a round cap with a ring on top (for fastening a plume when on parade), hinged cheekpieces, a neck protector in back, and no visor. His military boots (caligae) were laced high over the ankle and had carefully placed hobnails on the sole for traction. Around his waist he wore a military belt (cingulum militare) to which were attached a sheath and short dagger (pugio). From the front of the belt, over his belly, were suspended strips of leather to which metal disks were riveted. In his left hand he carried a large shield (scutum), usually a curved rectangular shape though sometimes oval; this was made of leather and canvas stretched over a wooden frame and was often decorated with individual designs representing his service, century, and cohort. Over the handgrip was a round metal boss that provided room for his hand and was useful for deflecting blows. His primary throwing weapon was a carefully designed javelin (pilum), of which he carried one or two. These had sharp, tempered metal points attached to long, untempered metal shafts that would bend on impact, making the javelin hard to pull out of a wound or shield and impossible to reuse by the enemy. His sword (gladius) was designed for the stabbing and thrusting (rather than slashing) style of hand-to-hand combat favored by the legions; it was short (approximately 20-22 inches long), with a two-edged blade that tapered to a sharp point and was carried in a scabbard suspended from a shoulder belt. Click on the following for more images:

Auxiliary troops (auxilia) were composed of noncitizens, usually from the various Roman provinces. As their name suggests, they were intended to supplement the legionary infantry that was the backbone of the Roman army by employing different methods of fighting, including light-armed infantry, slingers, archers, and especially cavalry. Auxiliary soldiers were also organized in cohorts and usually served under the command of Roman officers, though they were occasionally led by chiefs from their own regions. Auxiliary cavalrymen used thrusting spears and longer swords than the legionaries; they carried smaller shields and often wore armor of chain mail. The parade dress of the cavalry was quite dramatic, including a mask that covered the faceor even the whole head; even the horses wore elaborate face coverings. Click on the following for tombstones of auxiliary cavalrymen:

The primary activity of soldiers was of course training and fighting. The Roman army was a highly organized and disciplined fighting machine. The basic tactical fighting unit was the cohort, composed of 6 centuries, each with its centurion, standardbearer and hornblower to relay commands and maintain discipline and unity. Signals were sounded either on the round horn (cornu, carried by a cornicen) or a long straight trumpet (tuba, carried by a tubicen). Besides fighting in the open, soldiers had to defend Roman cities and forts against sieges and to conduct sieges against enemy cities and forts. One fighting formation used in such sieges was the “turtle” (testudo), in which the legionaries made a kind of protective shell by layering their shields over the heads and sides of a tightly packed group of men. Long sieges could involve elaborate construction work, as can be seen in this model of the Julius Caesar's siege of Avaricum. Siege machines included siege towers and battering rams as well as various types of artillery. Catapultae used a cross-bow principle to shoot heavy iron bolts with arrowheads; the scorpio was a smaller type of catapult. Ballistae were similar to catapults, though larger, but they shot stones instead of arrows.

See Josephus for a description of the many other activities carried out by Roman soldiers, including building camps, tending the wounded, quarrying stones, building walls and fortifications, and building roads and bridges. All these were carried out for increasingly long terms of service. The original maximum service was 16 years, with approximately 6 of these years on active duty. Augustus first increased the term to 16 years of active service plus 4 additional years on reserve and later to 20 years active service. After Augustus, full active service was required for 25-26 years. Legionary pay was never lavish (112.5 denarii per year, which was doubled by Julius Caesar to 225 denarii), and the cost of food and arms was deducted from this amount. In contrast, centurions received considerably higher pay; under Augustus, the lowest ranking centurion was paid 3,750 denarii and the highest ranking, 15,000 denarii.

Punishments: When the Roman soldier enrolled in legionary service, he swore a solemn military oath (sacramentum) originally to the Senate and Roman People, later to the general and the emperor, that he would fulfill his conditions of service even to the point of death; in effect, he gave up his citizen's right of appeal for any death sentence. Discipline in the army was quite rigorous, and the general had life-and-death power over his soldiers. The most lenient sentences, for minor offences, involved food rationing, hitting with the centurion's staff, or public flogging. More serious offences could lead to fines and deductions from pay, reductions in rank, loss of advantages from length of service, or even a dishonorable discharge (missio ignominiosa). For the most serious offences, such as desertion, a soldier could be summarily executed. The worst punishment of all was decimation, usually applied to a whole cohort, in which every tenth man in the unit was randomly selected to be clubbed or beaten to death by the other soldiers.

Rewards: Rewards were generally allocated on the basis of the rank of the recipient with the exception of one decoration, the “civic crown” of oak leaves (corona civica), which could be awarded to a soldier of any rank who saved the life of a citizen. Consequently, we find the civic crown proudly displayed by individuals from various classes, from this image above the doorway of a house in Pompeii all the way up the the emperor Augustus (though his civic crown was awarded on a symbolic rather than literal basis). Legionary soldiers and noncommissioned officers below the rank of centurion were entitled to receive monetary bonuses, part of the booty and spoils after a conquest, and various decorations, such as a gold necklet (torques) or armband (armilla), or gold, silver, or bronze sculpted disks (phalerae) that were worn on the breastplate during parades and other dress occasions. Upon his honorable discharge (missio honesta), a legionary soldier received permission to marry, a pension, and sometimes a grant of land. Auxiliaries frequently received a diploma, two small engraved bronze tablets bound together with bronze threads; these recorded the privileges granted to the soldier on his discharge, which often included citizenship and the right to contract a legal marriage (click here for a facsimile drawing of a diploma with inscription from 98 CE).

Besides the above decorations, centurions were entitled to various other crowns, including a plain gold crown (corona aurea) and the mural crown (corona muralis), given to the first man over the walls of a besieged city. Higher officers could be awarded a ceremonial silver spear (the hasta pura) or a small silver replica of a standard or flag (the vexillum). The highest military decoration was the siege crown (corona obsidionalis), made or grass or other vegetation and awarded to the officer responsible for delivering a besieged army. 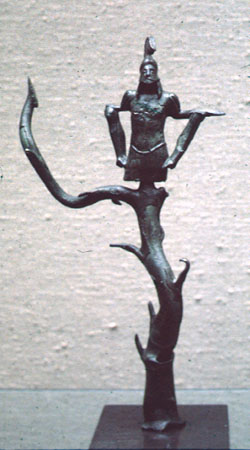 Victorious generals received the most tangible awards as well as the highest honors. They frequently set up a trophy (tropaeum) in a prominent location, displaying enemy shields, weapons, and armor captured in battle. Generals could also claim the largest share of the booty and spoils from conquered cities and tribes, including captives who could be sold into slavery. These could include women and children, though the most prominent captives, such as chieftains or rulers, would be retained to march in the general's triumphal procession, with the possibility of subsequent execution. The greatest reward of all was the triumph (triumphus), an elaborate procession through the city of Rome to Jupiter's temple on the Capitoline hill. During the Republic a triumph could be awarded only to a victorious general (who was termed imperator or triumphator) upon permission of the Senate; during the Empire, triumphs were reserved for the emperor or members of the imperial family. The procession began with hornblowers and priests and sacrificial animals, usually pure white bulls raised especially for such occasions. Next came bearers carrying masses of booty and spoils and chained captives, the more prominent, the better. At the end of the procession marched the victorious soldiers in parade dress, followed by the lictors, senators, and the imperator himself. For this occasion he was dressed in gilded shoes and purple garments embroidered with gold (the tunica palmata and the toga picta). He rode in a special gilded chariot pulled by 4 horses; he carried a small ivory scepter topped with the image of an eagle and wore a crown of laurel leaves. Since all these trappings put the triumphator in a godlike position, behind him in the chariot stood a public slave who held a gold crown over his head and repeatedly reminded him that he was only a mortal. Triumphs were so significant that they were often represented on coins and other objects, such as this coin of Octavian, a cameo of an emperor (probably Hadrian) whose chariot is pulled by eagles and whose head is crowned by the goddess Roma, and even a honey-cake mold depicting the triumph of Marcus Aurelius, whose head is crowned by a winged victory.

The triumphal arch provided a more permanent record to commemorate a great victory; these were often topped with an image of the emperor or general driving the triumphal four-horse chariot (quadriga), as can be seen on this coin of Octavian.