The Roman Army in the Late Republic and Early Empire 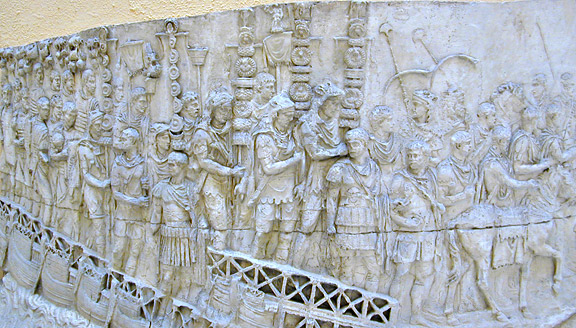 NB: Over the centuries, the Roman army changed and developed, and conditions often differed somewhat depending on the provinces where the troops were fighting and stationed. The following information is intended to give a generic picture of military organization, armor, weaponry, etc. during the late Republic and early Empire.

The legion was the basic unit of Rome's standing army of career soldiers, the legionaries, who were all Roman citizens and fought primarily as foot-soldiers (infantry). The number of legions under arms varied in different time periods (there were, for example, 28 legions under Augustus in 25 BCE), and each legion had both a number and a title, though some numbers were duplicated (we know, for example, of III Augusta, III Cyrenaica, III Gallica, III Italica, III Parthica).

Though the exact numbers of men in a legion varied, the basic pattern of organization remained the same. The smallest unit was the tent group (contubernium), composed of 8 men who shared a tent, a mule, and eating equipment. These were organized into a disciplinary unit called a century (despite the fact that a century typically had 80 rather than 100 men), under the command of a centurion. The basic fighting unit was a cohort, composed of six centuries (480 men plus 6 centurions). The legion itself was composed of ten cohorts, and the first cohort had many extra men—the clerks, engineers, and other specialists who did not usually fight—and the senior centurion of the legion, the primipilus, or “number one javelin.”

As Josephus notes, the Roman camps were always constructed according to a set pattern, laid out like a city bisected by two streets leading to four gates. Even temporary camps used when the army was on the march were always fortified, surrounded by a deep ditch and a wall. Click on the following for some images associated with military camps: 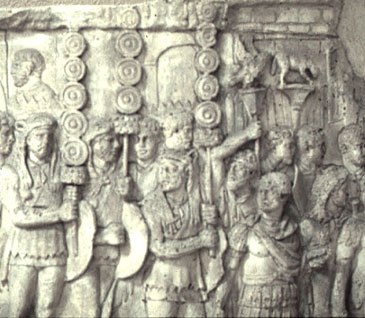 One of the most striking visual aspects of the Roman army were the standards, tall poles topped with various insignia and symbols, including many types of animals. During the Empire, the image of the emperor was also added to many standards. The standards were not just for show; they served important practical functions as well. Each century, cohort, and legion had its own standard; during battle and other activities, these were held by officers called standardbearers (general term signifer) who were marked out from other soldiers by the animal-head skins they wore on their heads, which can be clearly seen on this relief from Trajan's column. The standards helped to keep the units together, since the soldiers could see them above the action. Standards also helped to preserve the cohesiveness and pride of each unit, as they represented a concrete symbol of that unit's achievements. They were also used in various religious rituals designed to promote unity. The most important standard in each legion was the legionary eagle (also visible in this relief), made of a precious metal (usually silver) and symbol of the power of Rome and the honor of the legion. To lose the legionary eagle in battle was a terrible disgrace, and leaders like Augustus who succeeded in recovering captured legionary eagles capitalized on the propaganda value of the event (for example, Augustus depicted the surrender of the eagle that had been captured by the Parthians on the cuirass of his Prima Porta statue). The eagle standard was carried by a special standard bearer (aquilifer) who wore a lion-skin headdress. Click on the following for more images:

General: Each military campaign was assigned one general (dux), though there was not a single commander-in-chief until imperial times because a number of campaigns could be conducted simultaneously in different geographic areas. Generals were always aristocrats of the senatorial class, usually consuls or ex-consuls, since they had to hold at least praetorian rank in order to be granted imperium (the right to command an army) by the Senate; during the Empire, the emperor was the sole commander-in-chief, though he frequently delegated the actual command duties to generals who were his close associates, often relatives by birth or marriage. Generals and other officers wore Greek style armor over the military tunic—a molded leather breastplate that imitated the musculature of the chest and fringed strips of leather over the thighs and shoulders. Extant depictions of generals (like this relief of the emperor Trajan addressing his troops) do not show generals wearing helmets, but they may of course have worn them in battle. The item of clothing that visually distinguished a general from all other officers was his purple cloak (this was a military style cloak, called a lacerna, that was fastened by a large brooch on one shoulder).

Legates and Military Tribunes: Generals commanded many legions, but each legion had its own commander (at least after the time of Augustus), called the legionary legate (legatus), who was also of senatorial rank. Under each legionary legate were six military tribunes (tribuni militares), who carried out administrative duties. Young upper-class Roman men used this position as a stepping-stone to a political career, so the tribunes often did not have much military experience or ability.

Centurions: Chief among the officers who were not of equestrian or senatorial rank were the centurions (centuriones), each of whom commanded an eighty-man century. The centurions were professional soldiers, responsible for maintaining discipline in their units and for supervising the fighting on the field. In other words, they were the officers who kept the army running (and fighting) smoothly. The armor of the centurions was similar to that of other officers, with the exception of their helmets, which were topped with a transverse crest that extended from side to side instead of front to back, the shin protectors ( greaves) they wore on their legs, and the vinewood staff they carried to discipline soldiers. This tombstone, put up for the centurion Marcus Caelius by his brother even though his body was never found, shows the vinewood staff and the numerous medallions (phalerae) won in battle by Caelius. Under each centurion was a standardbearer, a deputy (optio) who took command of the century if the centurion was killed or wounded, and the tesserarius, who was in charge of the sentries. 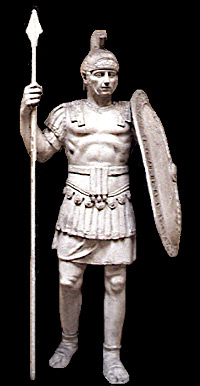 The Praetorian Guard: Since the time of Sulla, Roman legions were not allowed to be stationed in Rome or Italy, but in 27 BCE Augustus founded a new, elite organization, the praetorian guard, to serve as a permanent bodyguard for the emperor. There were originally 9 cohorts, 3 of whom were stationed in Rome with the rest in nearby towns. Under Tiberius, all 9 cohorts were garrisoned in one camp in Rome (the castra praetoria), and Caligula increased the number of cohorts to 12. The praetorians were under the command of two prefects (later only one) of equestrian rank and were divided into centuries in the usual manner. Service in the guard was easier and more prestigious than in the legions, and praetorians were paid 2-3 times more than the legionaries. As can be seen from the statue at right, their armor was similar to the dress uniform of earlier Republican troops, with molded leather breastplates and helmets with visors and crests. To learn more about the praetorians, visit the Praetorian Camp in Region VI of VRoma, either via the web gateway or the anonymous browser.

The Urban Cohorts: When Augustus instituted the office of city prefect (praefectus urbi), he also established 3 cohorts (the cohortes urbanae) to constitute a sort of police force for the city of Rome. These troops were also stationed in the camp of the praetorians in Rome, though they served under the command of the city prefect, a man of senatorial rank. Outstanding service in the urban cohorts could lead to promotion into the more prestigious praetorian guard.

The Vigiles: The vigiles, also founded by Augustus, served as fire fighters and night watchmen in the city of Rome. They were originally drawn from the ranks of freedmen and were not really soldiers, although they were organized on a quasi-military basis. The commander of the vigiles was a prefect of equestrian rank (the praefectus vigilum). They were divided into seven cohorts led by tribunes; each cohort was responsible for two of the 14 regions of the city.