Livia was born in 59 or 58 BCE. The daughter of a Roman noble named Marcus Livius Drusus Claudianus, she is often referred to as Livia Drusilla. At the age of 15 or 16, she was married to Tiberius Claudius Nero, who was an opponent of the young Octavian. She gave birth to her first son, Tiberius, in 42 BCE, and by 40 BCE the family had fled from Rome to the protection of Mark Antony. They soon returned to Rome, however, and by 38 BCE we find a pregnant Livia divorcing her husband to marry Octavian, himself newly divorced from his first wife Scribonia, who had just given birth to their daughter, Julia. The events leading up to this marriage are not clear, but it seems safe to assume that both Octavian and Livia wanted this union, since it caused a great deal of scandal and tongue-wagging in Rome at the time. Several ancient sources report that Octavian tried to minimize the scandal by putting out the story of a divine omen that indicated the special role Livia was to play: supposedly when she was travelling to her country estate an eagle, the bird of Jupiter, dropped in her lap a pregnant hen holding a sprig of laurel in its mouth. Three months after the marriage, Livia's second son, Drusus, was born. In accordance with Roman custom, Livia's boys went to their father to be raised, while Julia stayed with Octavian and Livia. When Tiberius Claudius Nero died in 32 BCE, Livia's sons also joined Octavian's household.

In 35 BCE, Octavian had persuaded the Senate to set up public statues in honor of his sister Octavia and his wife Livia and also to grant both women sacrosanctity, state protection. He was already singling out his family as special, and by the time he received the title of Augustus in 27 BCE, he was actively promoting his household, which had started out in a most unconventional manner, as the epitome of old-fashioned Roman “family values.” Augustus used to boast that Livia spun and wove the cloth for his tunics, and her images portray her with a severely conservative hairstyle and little jewelry; the dignity of her posture is emphasized by heavy drapery, and many of her statues clearly show her wearing the stola, the sleeveless overgarment that characterized the respectable Roman matrona. Despite the fact that Livia was never able to bear children for Augustus (although she may have had a miscarriage or stillbirth), their marriage lasted 52 years. 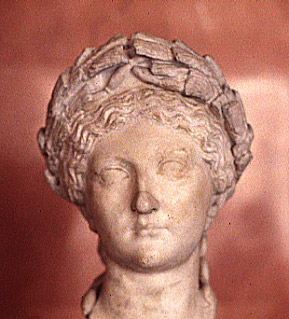 Augustus (or Augustus and Livia working in concert) carefully crafted the public display, honors, and status given to his wife. On the one hand, she had sacrosanctity and the right to sit in a special place with the Vestal Virgins during public performances; she received large numbers of clients, commissioned and dedicated public buildings, sponsored charities and interceded on behalf of provincial embassies. On the other hand, her entire public persona and all of her images and actions were closely connected with marriage, the family, and traditional Roman morality. The Portico of Livia (which can be visited in VRoma either anonymously or via the interactive web gateway), a public recreational area consisting of a large courtyard surrounded by a covered colonnaded walkway, contained within it a Shrine to Concordia, dedicated to marital concord and harmony; at the time of its dedication she gave a large banquet for the respectable matrons of Rome. Her actions may have been untraditional in their public prominence, but they were directed toward very traditional ends. In the words of Ovid quoted above (Epistulae ex Ponto 3.1.125), while Livia may have been a leader (princeps, the term applied to Augustus), she was still emphatically womanly (femina). Allusions to her on coins were also restrained. The unconventionality of her role made some Roman writers uncomfortable, and there were rumors that she had been involved in at least some of the untimely deaths of Augustus' designated heirs. However, while she undoubtedly favored the accession of her son Tiberius, there is no evidence that she used criminal means to help him to the throne. The great-granddaughter of both Livia and Augustus, Agrippina the Younger, followed the precedent set by Livia in many ways, including iconography that portrayed her with the attributes of a goddess. She, too, was the wife an emperor (Claudius) and helped her son (Nero) succeed to the throne. But in this case all the initiative came from her, and she was more open than Livia in her use of power (for example, having herself portrayed on coins alone (see this aureus or this denarius) or coins with her son Nero; another view). Unlike Livia, Agrippina the Younger paid dearly for her unconventionality when she was murdered upon the orders of her own son.

In his will, Augustus adopted Livia into his own lineage, giving her the name Julia Augusta, and the title Augusta was to become a special honorific for subsequent empresses. As the widow of the now deified Augustus, priestess of his cult, and mother of the new emperor, Livia may even have been granted a lictor to accompany her on public occasions (the Senate certainly proposed a lictor for her, but the sources disagree about whether she actually got one). Images of Livia portrayed her as the personification of virtues such as pietas, and statues depicted her in the guise of various goddesses, especially Ceres, goddess of fertility and abundance. The cameo below shows Livia wearing the mural crown associated with Cybele, the Great Mother; in one hand she holds stalks of wheat, symbol of Ceres, and in the other is the bust of the divine Augustus. When she died the Senate voted to set up an arch in her honor—the type of monument previously reserved for triumphant generals—but Tiberius pretended to accept this honor, volunteered to pay for it himself, and then quietly let the whole matter drop. It was not until the accession of her grandson Claudius that Livia herself was deified as “diva Augusta” in 42 CE, as commemorated on this dupondius of Claudius. 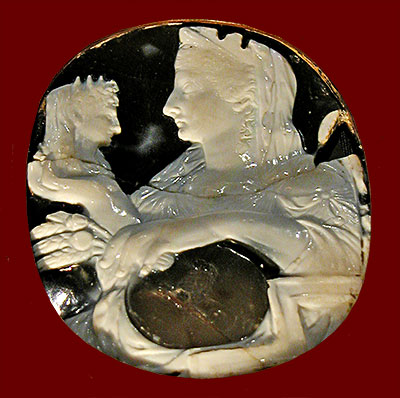