The shrine of Janus in the Roman Forum dated to the period of the kings, possibly to the time of Numa Pompilius. Its exact location is controversial, but it was apparently near the beginning of the street called Argiletum, as indicated on the plan of the Forum. This was the most important shrine to the archaic god Janus, and it marked whether Rome was at war (with the doors of the shrine open) or at peace (wth the doors of the shrine closed). Nero issued the above coin to indicate the cessation of war with Armenia with the surrender of King Tiridates. The legend on the coin reads PACE P[opuli] R[omani] TERRA MARIQ[ue] PARTA IANVM CLVSIT ("Since the peace of the Roman People was established on land and sea, he closed the Shrine of Janus"). 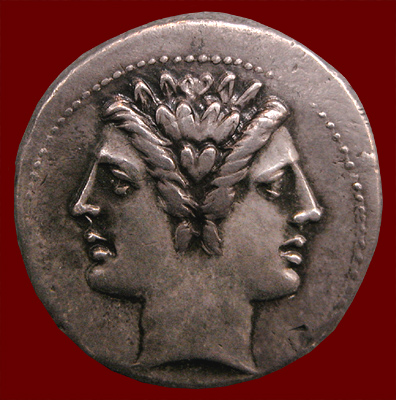 Janus was one of the oldest Roman deities, a god of beginnings, represented by gates and doorways (the Latin word ianua). He is frequently shown with two faces, as on the above Republican coin, a silver didrachm from Rome or south Italy dating to 225-12 BCE, referring to the fact that he looks both backwards and forwards. The first month of the Julian calendar bore his name, Januarius. Janus is called Quirinus (after an early Italic god) and also Geminus ("twin, two faced").

His shrine in the Forum, as shown on the following detail from Nero's coin, was a small rectangular structure with double bronze doors on each end. It apparently lacked a roof but had a high grating above the walls. According to tradition, the doors of this shrine were kept open as long as Rome was at war, so the ceremonial closing of these doors was of great significance. Augustus boasted that he had closed the doors of this shrine three times during his reign. 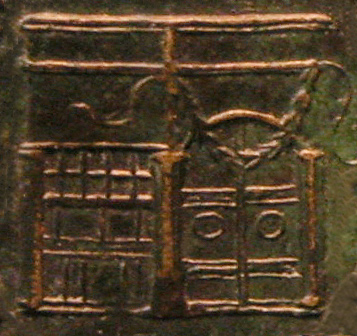