Hey, can you imagine a time when taking a bath was a social event like going to the movies is for us today? Or how about taking a bath with a group of your friends? Sounds pretty strange, doesn't it? Well if you lived in Ancient Roman times, this type of bathing would be a reality for you!

In order to really understand what the Ancient Roman baths were like, let's compare them with some of the bathing habits we perform today. 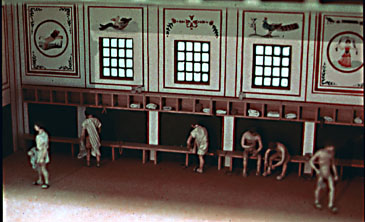 In the Roman bath houses, men and women did not bath together. It was considered to be in poor taste so, each had their own designated time at the bath house. For instance, woman may have been allowed in the bath houses in the morning while men came in in the afternoon. The later part of the afternoon was considered the best time for bathing so women got the short end of the stick on that deal. However, even though the men had the better time, the bath house fee for the women was twice what the men had to pay!

Once inside the bath house, the Romans would first go to a dressing room where they would change out of their everyday clothing. Although it is not known for sure what the Romans wore while bathing, it is believed that they probably wore a light covering called a subligaculum along with special sandals that had very thick soles.

Next, the Romans would apply an oil to their body (or if you were rich, a slave would apply it for you) and begin their daily exercise. The exercise would take place in the large courtyard in the center of the bath house called the palaestra. Exercises would include weight lifting, running, swimming and ball playing. 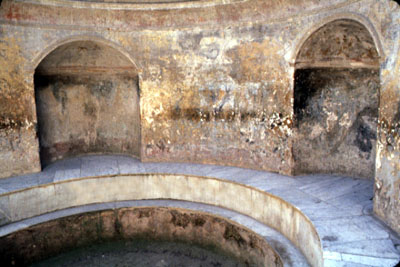 Once exercise was finished, the oil that had been put on the body would be scraped off with a metal instrument called a strigil. At this time, bathing would begin. Throughout this process, they would walk through a series of rooms which varied drastically in temperature. These rooms included a tempidarium which was the warm room with heated floors and walls but without any water, the caldarium which was the room for the hot bath and the frigidarium which was the cold bath room.

You may think that, after the baths, the Romans would head home. Actually, once they finished bathing, they would read in the library, buy food from a vendor, walk through the gardens or watch a performance by an acrobat or a juggler. 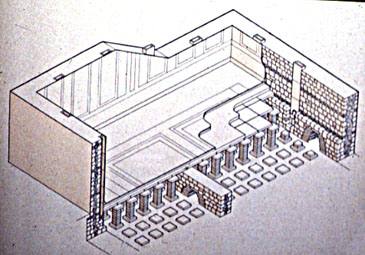 In order to heat these bath houses, the Romans used a hypocaust. This system lifted the floor of the ground using pillars and leaving spaces in between the walls. This allowed the hot air to flow better through the rooms. The rooms that needed a lot of heat were placed close to the furnace.

The Roman baths were as much of a social event as the theatre or the chariot races and they thought nothing of this. It's funny to think that we're studying bathing under the entertainment section of our class. What the Romans saw as entertainment, we see merely as an essential hygienic ritual. Maybe some day, hundreds of years from now, the things in which we do for entertainment will be done on a daily basis. Just think of those sixth graders, maybe for them, watching television will be necessary for their health and hygiene!