Art in the Roman Home 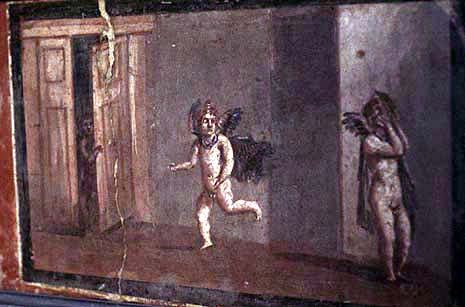 Maybe, at your house, your little sister has fingerpaintings she did in kindergarten hanging on the refrigerator, or maybe you have a picture in a frame of you and your brother on the coffee table. There are little pieces of artwork all around our houses today, and it was very much the same in Ancient Rome. Romans decorated the interior of their houses magnificently, and the ruins left behind do not offer much help for us to understand how beautiful their mosaics and wall paintings truly were. Thankfully, some mosaics and wall paintings have been preserved, and many busts that were in the Roman homes have survived with only cracks and chips.

Of course, Romans did not have photography, but they did have excellent artists who made very life-like replicas of prominent people in families. Just like you might have a picture of your grandmother, upper class Romans who had high ranking Senators (known as consuls) in their family had busts, which are statues (click here to see a bust), of all of the consuls in their family. 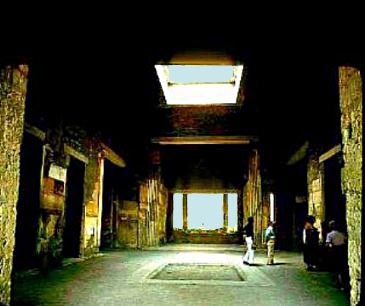 Romans were known for their wall paintings and mosaics. Roman wall paintings usually depicted some sort of everyday scene in Roman life (like of gladiators, or of someone buying food at the market), or it might be of a God or Goddess that the family held to be especially holy. Roman wall paintings were painted on dry plaster (unlike fresco paintings, which were done on wet plaster). Mosaics are pictures made from different colored pebbles, pieces of glass, or fragments of most anything, held in adhesive (bonding) cement (maybe your bathroom floor has tiny tiles on it - that somewhat looks like a mosaic, but mosaics used different colors to show pictures). To see a mosaic of a "watch out for the dog" sign, click here.

Romans had different art in each part of their homes. Look at the table below to see what sort of art was common to each different part of the home. You can click the green underlined text to get another page which has information and pictures showing the room.

If you would like to learn more about the Roman home, there is a website called "La Casa Romana" (that means the Roman House). This website has great pictures, but the language used in the site is Italian, so I suggest only visiting for the pictures.