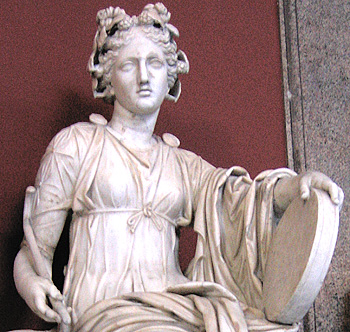 Thalia, muse of comedy, holding a tympanum and stick (photo courtesy of VRoma)

The tympanum was a round, shallow, hand-held drum with a wooden or metal rim around which was stretched oxhide, on which a player beat with open palm or stick; some tympana had bells embedded in their rim, others had a deeper shape (see Smith's dictionary). The instrument came to Rome from Greece and the East, probably in association with the cult of Cybele (see Catullus, Carmina 63 ) and the worship of Dionysus. The tympanum was used for various public and private entertainments, in funeral and religious processions, and in the military (see musical instruments of ancient Rome).
Widespread and long-term as its use, Umbricius' non gentilia dismisses the instrument as non-Roman. 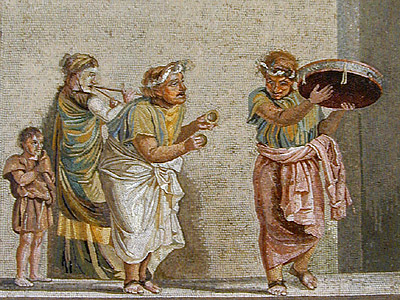