Citizens addressed by the emperor (detail from the Anaglypha Traiani)

Quirites, sons of Quirinus, an ancient god worshipped by the Sabines on the Quirinal. Livy in AUC I.13 explains that, upon the union of the Sabines and the Romans into a single state, they called the civic populace Quirites, after the Sabine town of Cures. Ovid in Fasti 2.476-480 repeats this explanation and adds an alternative possible derivation from the Sabine word curis, meaning spear. In modern times the name has been linked to a reconstructed Latin form *co-viri-um or "assembly of the men." Certainly, Quirites is what the Romans called themselves when addressing each other as "citizen men," without reference to class or rank. 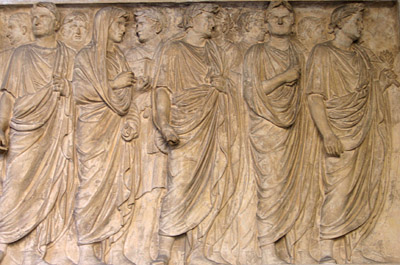