The administration of justice, originally one of the duties of the two consuls, became the responsibility of a new curule magistracy with imperium, the praetorship, an office just below the consulship in the cursus honorum.

Eventually two praetors were elected annually, from the upper citizen classes as magistracies were not at first open to plebeians. One praetor served as the urban praetor, praetor urbanus, who decided cases in the city to which citizens were parties; the other became the external praetor, praetor peregrinus, who decided cases involving one or more foreigners and served as the supreme authority in the provinces. The urban praetor remained in Rome, primarily as a judge in the law courts, but he could also convene the comitia and initiate legislation. In the absence of the consuls from the city, he could lead the military in defending Rome and summon the Senate. The opportunity to administer a province as propraetor at the end of his term of office was a lucrative privilege voted by the Senate, who were known to pass over hopefuls.

The praetor wore the purple-bordered toga, the toga praetexta. When he heard substantive cases, he sat on the sella curulis, which was placed upon a tribunal (see chair and tribunal on a coin showing Augustus receiving victory laurel branches); on small issues he could be approached for a decision anywhere by a petitioner. In the last century of the Republic, the number of praetors increased while their powers and their assigned lictors, originally six, decreased to two.

In Saturae 10. 36-46, Juvenal conflates into a single image the only two occasions when the ornamental tunic and toga of Jupiter, along with the god's crown and scepter, were permitted to be worn by men, riding in a chariot: when the praetor presided over the games and when generals celebrated a military triumph. The praetor's responsibility for organizing public games, which gained him popular favor, continued through the imperial period. 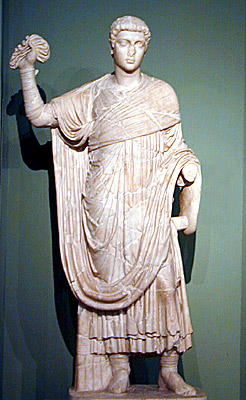