Minerva was an ancient Italian goddess of handicrafts and patroness of guilds and thus was the patroness of women. As the goddess of skills, particularly those of the hand and mind, she guided male craftsmen and warriors, associations which connected her to the powerful Etruscan goddess Menrva. As the virgin daughter of the supreme god Juppiter, she became identified with the Greek goddess Athena, daughter of Zeus, and is thus frequently portrayed with the attributes of that goddess—an owl, helmet, shield, spear, and aegis (see the cape above and below, wreathed in snakes and emblazoned with the head of Medusa). Minerva was one of the trio of Capitoline deities in Rome; along with Juno, she shared the Temple of Jupiter Optimus Maximus on the Capitoline Hill above the Roman Forum.

Text and photo below courtesy of B. McManus at VRoma 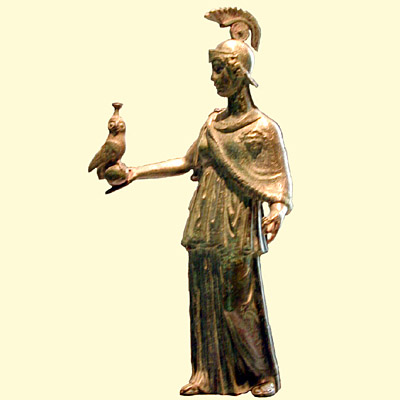