Reconstruction of a Roman Litter (photo courtesy of VRoma)

The lectica, a kind of portable bed, originated in the East. Initially the Romans viewed it as a symbol of decadence, but it became an increasingly popular mode of transportation for the well-to-do in the late Republic. In the imperial period, elaborately decorated litters were fashionable.

Made of wood, the litter was basically a couch, such as the Romans used for sleeping or reclining at dinner. Four posts were added to support an overhead canopy, which provided shade. A rod above the canopy permitted curtains to be hung, which could be left open for air and observation or closed for privacy and sleeping. The poles fastened to the sides of the couch were the means by which strong, preferably tall, lecticarii-- four to eight, depending on the weight of the litter and its occupants -- carried patrons on their shoulders, high above the heads of the crowd. In Carmina 10 , lines 15-16 and 20, Catullus proudly claims to have brought back to Rome eight straight-backed litter-bearers from Bithynia, where he says the practice originated .

In the city, where the Oppian Law forbade the use of wheeled vehicles in the daytime, the lectica was used more by women. In the country and for long journeys, wealthy aristocrats of both sexes preferred this mode of travel to wheeled carriages, which offered no protection from the discomforts of uneven roads. Cicero was traveling by litter to escape proscription by the triumvirs when he was stopped and killed. 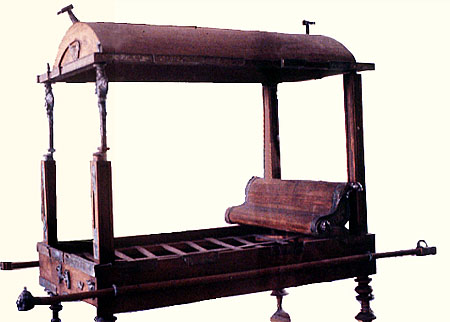